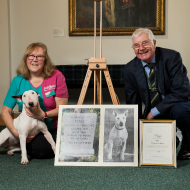 Fellow bull terrier Billy recieved the award on Peggy's behalf at a ceremony held at the Gordon Highlanders Museum, Aberdeen.

A bull terrier named Peggy has been posthumously awarded with the PDSA Commendation, for providing unwavering support and championship to captured Scottish soldiers in World War Two.

The 2nd Battalion Gordon Highlanders found Peggy on the streets of Malaya (now part of Malaysia) and took her in. She became their mascot and loyal companion during the battle of Singapore in February 1942.

When the British Army surrendered, the Battalion’s Soldiers and Peggy were taken as prisoners of war (PoWs) and sent to Thailand along with thousands of other prisoners, where they were forced to carry out gruelling physical labour in awful conditions.

Soldiers shared their rations with Peggy and she would hunt for rats which her comrades would then cook and add to their meagre portions of rice.

The Gordon Highlanders and Peggy were freed after three-and-a-half years in captivity, and she lived at the Battalion’s barracks in Aberdeen until her death in 1947.

Peggy was nominated by Stewart Mitchell, a volunteer historian at the Gordon Highlanders Museum in Aberdeen. He said: “Peggy was a loyal and courageous ally to her Gordon Highlander comrades. When she saw a Gordon Highlander being attacked, she would fearlessly try to intervene, often at the cost of a blow with a split bamboo cane or worse, a stab from a guard’s bayonet. She bore the scars of these encounters for her entire life.

“Throughout the whole duration of their imprisonment, with the men in a seemingly hopeless situation, just struggling to survive another day with no end in sight, Peggy’s presence boosted their morale.”

Fellow bull terrier Billy received the commendation on Peggy’s behalf at a special ceremony held at the Gordon Highlanders Museum.

PDSA veterinary surgeon Fiona Gregge, who presented the award, said: “Peggy’s remarkable story has touched all of us here at PDSA.

“The PDSA Commendation recognises the outstanding devotion that animals display and celebrates the amazing ways they enrich our lives. It is clear that the soldiers drew a great amount of strength from Peggy’s unwavering loyalty and friendship during what was a deeply traumatic time in their lives.”

“Peggy was a truly exceptional animal and she is a worthy recipient of this award.”