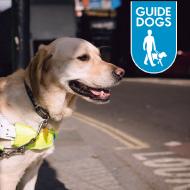 More than 95 per cent of people with sight loss have been forced to walk in the road due to a car parked on the pavement.

UK charity Guide Dogs is calling on the government to introduce a new law to limit pavement parking to areas only permitted by local authorities.

The call comes as the charity publishes a report highlighting the wide array of people affected by pavement parking and the impact it has on their everyday lives.

Blocked In: The Impact of Pavement Parking reveals that nine in 10 people with disabilities, mobility scooter users and parents or carers with pushchairs have reported issues with pavement parking.

It also shows that people with sight loss are particularly affected, with more than 95 per cent of those surveyed saying they have been forced to walk in the road, potentially into traffic they cannot see.

Guide Dogs says that, despite promises made in 2015 for a pavement parking ban, the Government has failed to act. Senior public affairs and campaigns manager Helen Honstvet said:

“Today’s findings reflect the everyday impact pavement parking has on a wide number of pedestrians, which was acknowledged in September’s Transport Select Committee inquiry. It’s been over 1,500 days since the Government promised to look into the issue, and they still haven’t published their findings.

“We are urgently calling on the Government to introduce a new law limiting pavement parking to areas determined by local authorities. This system has been in place in London for over 40 years, and our report shows that in London, far fewer people with sight loss faced daily problems with pavement parking compared with the rest of the UK.”

When Guide Dogs come across an obstacle they are trained to guide their owner to the kerb. However, it is then up to the owner to decide when it is safe to step into the road.

The report found that one in five people blind or partially sighted people have sustained injuries trying to get around a vehicle blocking pavements. Guide dog owner Linda Parsons from Peterborough said that she frequently experiences issues with pavement parking:

“People park their cars in such a way they are completely blocking the path so I’m forced to walk in the road," she said.

"I’ve tripped and been injured when I’ve tried passing a car blocking the pavement. There have even been times when I’ve asked the driver who is parked on the pavement to move their car and been told to walk in the road like everybody else, despite the fact I’m clearly with my guide dog.”

Ms Honstvet added: “While pavement parking may be convenient for drivers, it acts as an immediate physical barrier to some of the most vulnerable in society and can lead to some people feeling lonely and isolated from their local communities.”