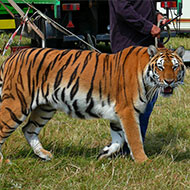 "A ban on the use of wild animals in travelling circuses is one big step closer" - Chris O'Brien.

A new Bill set to ban the use of wild animals in travelling circuses in Wales has passed its second reading.

The proposed ban has been welcomed by the RSPCA, but the charity says it is ‘eager to see further improvements to the Bill’, including a full ban on wild animals travelling with a circus.

Chris O’Brien, RSPCA public affairs and media manager, said: “With stage two consideration complete, a ban on the use of wild animals in travelling circuses is one big step closer.

"Travelling circus life is wholly inappropriate for wild animals – so this ban is so important for Wales. Confinement, stressful transportation, forced training and abnormal social groupings are all a grim reality for the animals involved.”

He added: “While the legislation is very welcome, we are eager to secure further improvements to the Bill - and worked closely with Members of the Senedd to get key amendments tabled; including those that would close loopholes, ensure a full ban, and bring this law into force more quickly. We’re really grateful to those who supported these calls.”

Travelling circus life seriously compromises the welfare of wild animals. If the law is passed, Wales will join 45 other countries around the world that have outlawed the use of wild animals in this environment.

RSPCA Cymru has been working closely with Members of the Senedd on a series of amendments they hoped would further improve the Bill. However, on this occasion, these did not receive the backing of MPs.

Mr O’Brien added: “The RSPCA is disappointed these amendments weren’t successful - but will continue to work hard in the hope of further improving this important law; as Wales gets ever-nearer to bidding farewell to the out-dated spectre of wild animals being used in travelling circuses.

“Clearly, this was an important day for animals; with this ban one step closer to reality. We can’t wait to see the use of wild animals in travelling circuses consigned to the history books in Wales - once and for all.”