Cookie use on MRCVSonline
We use cookies to ensure that we give you the best experience on our website. If you continue without changing your settings, we will assume that you are happy to receive all cookies.
Accept Policy
Change cookie settings
Edinburgh Zoo reveals first look at giant anteater pup 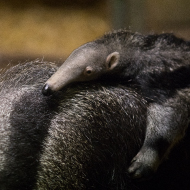 Staff will decide on a name for the pup after its first health check.

A giant anteater pup, born at Edinburgh Zoo in November, has been spotted for the first time riding on its mothers back.

It is expected to be a few months yet before the pup is large enough to move around independently. It will soon have its first health check and be weighed, sexed and named.

Edinburgh Zoo’s head of carnivores Alison MacLean said, “Both mum and baby are spending a lot of time in their off-show area at the moment while the youngster grows.

“Giant anteaters are vulnerable to extinction in the wild, so every birth is a potential lifeline for the species.”

The pup’s mother, Nala, and father, Lucifer, arrived at the zoo in 2009. Since then they have produced two pups, a female born in 2010 and a male in October 2012. Both of which have moved on as part of the European breeding programme for giant anteaters.