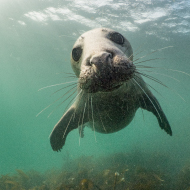 "The clap was incredibly loud and at first I found it hard to believe what I had seen." – Dr Ben Burville.

A study led by Monash University has revealed that grey seals will clap their flippers together while underwater to communicate during breeding season.

It is widely known that marine mammals such as whales and seals communicate vocally through whistles and calls, and zoo animals can be trained to clap on command, but this is the first time a seal has been observed in the wild clapping its front flippers of its own accord.

Dr Ben Burville, a visiting researcher with Newcastle University, filmed the animals in the wild for 17 years, before capturing footage of a male grey seal producing a loud ‘crack’ sound by clapping its flippers together.

“The clap was incredibly loud and at first I found it hard to believe what I had seen.” Comments Dr Burville.

Researchers have theorised that the loud, high-frequency noise is used as a display of strength, which cuts through background noise to warn off competitors and attract potential mates during breeding season.

“Think of a chest-beating male gorilla, for example. Like seal claps, those chest beats carry two messages: I am strong, stay away; and I am strong, my genes are good,” Says Dr David Hocking from Monash University’s School of Biological Sciences.

He continues: “Human noise pollution is known to interfere with other forms of marine mammal communication, including whale song, but if we do not know a behaviour exists, we cannot easily act to protect it.”

The discovery of this important social behaviour among seals can help scientists and researchers to better understand the animals and work to protect their mating activity and breeding success.

Footage captured by Dr Burville can be seen below: