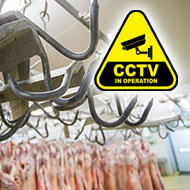 Only 10 slaughterhouses in Wales currently have CCTV installed.

Report makes recommendations ‘to ensure standards are not left to chance’

The Welsh Assembly’s Petitions Committee is calling for CCTV to be made compulsory in all Welsh slaughterhouses after a petition submitted by Animal Aid garnered some 1,066 signatures.

The petition states: ‘We call on the National Assembly to urge the Welsh Government to introduce mandatory CCTV in slaughterhouses to help vets with better regulation and monitoring, to provide footage for training and retraining, to deter some of the animal welfare abuses filmed by Animal Aid, and to provide evidence for prosecutions should they be necessary.’

After carefully considering the issue, the Committee concluded that it did not agree with the Welsh Government’s stance that CCTV should only be made mandatory if a voluntary approach proved inadequate. It has now published a report containing three recommendations ‘to ensure animals are treated with respect and dignity at all times’.

There are currently 24 slaughterhouses in Wales, of which only 10 have CCTV installed, according to the Welsh government. Funding for the installation of CCTV has been made available by the Welsh Government, but the Committee maintains that compulsory surveillance would be far more effective in ensuring that animal welfare is maintained to the highest standards.

Legislation to make CCTV mandatory in all English and Scottish abattoirs came into force in 2018 and 2019, respectively. In 2019, an investigation was launched by the Food Standards Agency (FSA) after undercover footage emerged of animals being severely mistreated at an abattoir near Wrexham, Wales. The film even included evidence of workers slaughtering animals without adequately stunning them first.

A separate petition calling for “adequate funding to protect the welfare of farm animals in Welsh slaughterhouses” was also received by the Petitions Committee. Currently, FSA’s animal welfare inspections are funded by the Welsh Government. However, the Petitions Committee was informed that the Welsh Government only allocated £32,000 of funding in 2019/20, and just £7,400 in 2016/17.

The Committee is now urging the Welsh Government to provide enough funding to carry out sufficient animal welfare checks at slaughterhouses in Wales, including the enforcement and monitoring of CCTV footage.

Janet Finch-Saunders AM, chair of the Petitions Committee, said: “It is of utmost importance that animals are treated with respect and dignity at all times, including at the end of their lives. The Committee does not believe that the purely voluntary approach currently being taken forward by the Welsh Government is sufficient to ensure that correct welfare standards will be upheld in all cases.

“One way we can ensure standards are not left to chance is by making CCTV compulsory in critical areas of slaughterhouses, including where animals are kept and where they are killed."

She continued: "We consider that it is time that the Welsh Government acted to help reassure everybody in Wales that the suffering of animals is minimised at these extremely sensitive moments. It is also imperative that adequate funding is provided by the Welsh Government to reinforce these standards and to take appropriate action when required.”

The Petitions Committee report will now be considered by the Welsh Government.