Cookie use on MRCVSonline
We use cookies to ensure that we give you the best experience on our website. If you continue without changing your settings, we will assume that you are happy to receive all cookies.
Accept Policy
Change cookie settings
Female fish can breed new species if males are attractive enough 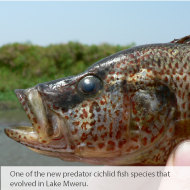 "Our research shows that hybridisation can fuel the evolution of new species which is a very novel finding." - Dr Joana Meier.

New research from St John’s College, University of Cambridge has found that fish will mate with males from different species if its colouring is attractive enough, or if the female can’t see it’s mate properly. This can lead to the evolution of a new species.

A group of scientists visited two freshwater lakes in East Africa, studying 2,000 fish and analysing the DNA of more than 400 cichlid fish over ten years. The group discovered more than 40 new, ecologically diverse species – called radiations – in Lake Mweru, which was formed roughly one million years ago.

Evolutionary biologist and lead author of the research Dr Joana Meier said: “The new species of cichlids adapted to use all the available food resources in the lake. Some feed on insect larvae, others zooplankton or algae. Some newly discovered fish are predators with large teeth, which we named ‘large-tooth serranchromines’.”

Through conducting mating ritual tests in a lab, the team discovered that female cichlids would choose males from a different species to mate with if their colouring was similar to that of the female’s own species. They also found that females could not distinguish between males of their own species or other species when lighting was poor, as they could not see their colours clearly.

Scientists determined that this is what happened a million years ago when different species of cichlids from the Congo and the Zambezi combined in Lake Mweru. Creating a diverse offspring that could feed on different things to their parents and invade new habitats. Eventually leading to the evolution of 40 new species of fish.

Dr Meier continued: “Hybridisation has traditionally been viewed as something bad because if species hybridise they can, over time, merge into a single species and you lose biodiversity or lose the local species.

“The melting pot of Lake Mweru gave us a rare opportunity to study interactions between evolving new species and showed that in a new environment with lots of ecological opportunity hybridisation can be a good thing that actually increases biodiversity.”