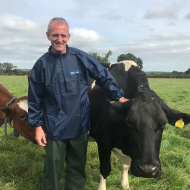 Nominations for the 2020/2021 BVA junior vice president (JVP) are now open, with all BVA veterinary surgeon members invited to self-nominate or nominate a fellow BVA member with their consent.

The position of JVP is open to BVA member vets who believe they or the person they are nominating is a strong, talented member of the profession who can contribute to, and represent, the voice of the veterinary profession. Veterinary surgeons from all professional backgrounds and experience are invited to apply.

“I had been involved with BVA in a number of roles for many years, from the policy group to Council and CPD Committee. But nothing could have prepared me for the excitement and whirlwind that my first few months as Junior Vice President have been,” said current BVA junior vice president, James Russell.

“My motivation to apply for this position was born out of a recognition of the hugely valuable role that BVA plays in the lives of all members throughout their professional lives. I could recognise how my own practice life, as well as my student experience, had been shaped in part by BVA and felt I wanted to be able to pass on some of that development to others.”

The JVP acts as an ambassador for the BVA and the wider profession, using their expertise to provide political and veterinary advice and working in close proximity with the BVA chief executive, media, policy and membership teams.

As with the other officer positions (president and senior vice president) the term is one year, beginning from BVA’s AGM in September and ending the following September. The entire commitment is three years as a BVA officer, and a further three years serving as a past president on BVA Council.

James Russell continues: “It is a tremendous honour and an exceedingly privileged position to occupy. It is also the most supportive, welcoming and nurturing environment I have had the pleasure to call ‘work’.

“Thanks to the fantastic staff at BVA, we as officers are enabled to feel prepared for the lobbying, media work, political policy meetings and myriad other engaging and demanding functions we fulfil. If it is something that interests you, I would encourage you to nominate yourself for the next Junior Vice President! I could certainly never have imagined that this person could have been me today.”

Nominations for the JVP are confidential and will be reviewed by the BVA Electoral College, which assesses nominations and formally selects members for election to BVA officer status.

Candidates for JVP and president must be elected by the membership at the AGM at BVA Members’ Day to serve the coming year.