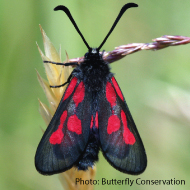 Intensive agriculture, artificial light and climate change are driving moth populations to other parts of Britain.

Intensive agriculture, artificial light and climate change are driving moth populations to other parts of Britain and Ireland, according to new research.

A study by researchers in Britain and Ireland also found that other moths have colonised Britain, or have spread northwards to become abundant and widespread.

Their results are revealed in the newly-published Atlas of Britain and Ireland’s Larger Moths - the first publication to trace the distribution of all larger moths of Britain, Ireland, the Isle of Man and the Channel Islands in forensic detail.

“The data used to produce the atlas has been collected by moth recorders (citizen scientists) who are united in their love, passion and interest in moths. It’s incredible what a movement of individuals can achieve as a community. We’re very grateful to everyone who has contributed their moth records, without them, we could not have published this book.”

The Atlas confirms that, in recent decades, some moth species have been lost entirely, including the Brighton wainscot and orange upperwing. There are also serious concerns for others, including the speckled footman, pale shining brown and stout dart, which have not been recently recorded.

Meanwhile, other moths have colonised Britain (such as the Clifden nonpareil and black-spotted chestnut) or spread rapidly north to be more widespread and abundant than they were previously.

In general, however, the abundance of moths have declined by as much as 34 per cent over the period 1970-2016. This is compared with only 11 per cent which have increased significantly.

Dr Randle continued: “Moths are indicators of the health of our environment, the declines reported are concerning, especially when you consider the potential knock-on effects for other creatures such as bats and birds that rely on moths and their caterpillars as a food source.

“Moths also have an important role as pollinators of wildflowers and garden plants, they could be considered to be the bees of the night-time. Ultimately, we need to understand and value other species and the benefits they bring to our lives and the perils we face if we don’t.”