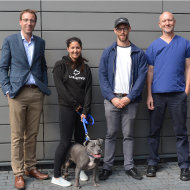 Battersea Dogs and Cats Home has announced a new partnership with StreetVet, a charity that provides free and accessible animal care, essential items and reassurance to homeless people and their pets.

As part of the new partnership, Battersea will provide StreetVet with operational and logistical support, including expert advice from its staff, clinical support, and kennel space for animals most in need. Battersea also plans to work with StreetVet on projects that will expand its reach, such as providing training to hostel staff to promote and facilitate hostels accepting dogs.

“I’m excited at the prospect of Battersea and StreetVet coming together for a partnership that aligns both organisations’ strategic values. Both of us care deeply about the welfare of dogs, particularly those most in need,” said Battersea’s deputy chief executive, Peter Laurie.

“StreetVet relies almost entirely on the support of a growing network of volunteers, including members of the Battersea clinic team, and is a great example of a volunteer-led organisation delivering significant impact on a wide geographical scale. By working together, we can increase our collective impact and help more animals in need.”

Since its inception in 2016, StreetVet has carried out almost 3,000 consultations to over 700 patients on the streets. Reliant on a team of more than 500 volunteers, the charity is present in 15 towns and cities across the UK, with two more planned to open soon.

"We are really excited about the official partnership between StreetVet and Battersea," said veterinary surgeon and co-founder of StreetVet, Sam Joseph. "As a small, growing charity, StreetVet will hugely benefit from the expertise, infrastructure and resources of one of the country's most loved and respected animal charities.

“This partnership will help StreetVet continue to provide free, accessible veterinary care to those most in need, while further increasing the impact that Battersea has on the welfare of dogs and cats across the UK."