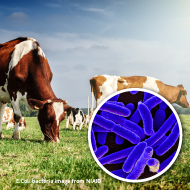 E.coli make up part of the normal gut flora of cattle and humans

A new study, published by scientists at the Moredun Research Institute, University of Edinburgh, Biomathematics and Statistics Scotland and international partners, has shown that a specific toxin produced by naturally-occurring E. coli bacteria help the organism to colonise the intestinal tract of cattle and increase transmission of the organism to other animals in the herd.

Rapid and high levels of expression of the toxin also mean that, when humans are infected, they are more likely to suffer more serious symptoms. These toxin properties help explain the emergence of this human pathogen over the last 40 years.

Escherichia coli (E. coli) is a group of bacteria that make up part of the natural gut flora of healthy humans and some animals. While many strains are harmless, some are known to cause serious disease.

Enterohaemorrhagic E. coli (EHEC) O157 are a subset of E. coli that are present in the gastrointestinal tract of cattle but cause no discernible disease in these animals. However, EHEC O157 excreted in the faeces of infected cattle, can be passed on to humans through exposure to contaminated water, meat or vegetables.

EHEC produce toxins known as Shiga toxins (Stx) of various sub-types. These toxins can cause a variety of diseases in humans by attacking the lining of blood vessels within the body. Clinical signs range from diarrhoea – with or without blood – to more severe and potentially fatal kidney disease. The most dangerous toxin subtype to humans is subtype 2a (Stx2a).

The study investigated the role of Stx2a in colonisation of the cattle gut. It showed that Stx2a plays a critical role in increasing transmission of EHEC O157 between cattle owing to a combination of two factors

This essentially allows infected cells to survive for longer.; and makes it more likely that the cattle will shed the bacteria in their faeces for longer and at higher levels – thereby increasing the chance that the bacteria can be passed to other cattle in the herd as well as to humans.

Prof David Gally, from the Roslin Institute said: “The study is important as it explains firstly why the Stx2a subtype has become common in E. coli O157 strains – the answer being that it can be produced more rapidly compared to some other Stx subtypes.

“Secondly, our work demonstrates how the toxin can provide an advantage in the animal host, basically by halting the usual turnover of gut cells that would remove adherent E. coli; so the bacteria colonise more easily, persist in the gut and can be excreted at high levels to go onto infect other animals and, possibly, humans”.

The original study was funded by the Food Standards Agency and Food Standards Scotland; and ongoing work between the study partners has developed a vaccine for use in cattle which has recently obtained commercial backing for a field trial.