Cookie use on MRCVSonline
We use cookies to ensure that we give you the best experience on our website. If you continue without changing your settings, we will assume that you are happy to receive all cookies.
Accept Policy
Change cookie settings
Elusive pine marten returns to the Forest of Dean 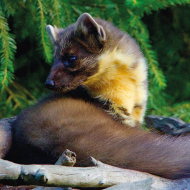 “As native omnivores, pine martens play a vital role in the delicate balance of woodland ecosystems."

Woodland creature has not been seen in the forest since 1860

The elusive pine marten, once widespread thought the UK, has been reintroduced to the Forest of Dean.

Eighteen of the creatures were successfully released into the forest between August and September. The pine martens were moved from Scotland and fitted with tracking collars.

Their activity will now be closely monitored by Dr Catherine McNicol from Gloucestershire Wildlife Trust.

“Pine martens are elusive and shy animals, with their presence often only indicated by scats in the middle of forestry tracks,” Dr McNicol explained.

“They only give birth to a few kits each year if breeding is even successful, so the rate of marten population recovery in the UK is low. It is hoped that their protection, alongside these reintroductions, will give them the boost they need to become resilient and thrive.”

With their slim bodies and long, bushy tails, pine martens were once common throughout Britain. However, extensive hunting together with the loss of habitat has resulted in their near extinction in England. The last official sighting of a pine marten in the Forest of Dean was 1860.

Historically, pine martens were pushed to the outer edges of the UK, becoming Britain’s second rarest carnivore. Eventually, their only remaining stronghold was in the north-west Highlands of Scotland.

Conservationists hope the animals will repopulate the forest and, eventually, spread and merge with the recently-introduced Welsh pine martens. The project will be overseen by Gloucestershire Wildlife Trust, Forestry England, Vincent Wildlife Trust and Forest Research.

Rebecca Wilson from Forestry England said: “As native omnivores, pine martens play a vital role in the delicate balance of woodland ecosystems. Living at low densities in the landscape, they forage on fruit, fungi and a range of prey including the grey squirrel, a non-native species which is having a detrimental impact on broadleaf woodland throughout England.

“We are looking forward to working with volunteers, local communities and partner organisations to monitor how the pine martens are moving throughout the Forest of Dean and the wider landscape.”