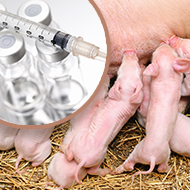 PPV is a reproductive disease present in most of the pig farms worldwide. It causes foetal death – particularly mummification of foetuses – and is associated with other reproductive disorders.

Many vaccines against PPV are available in the market; however, this latest is a subunit vaccine based on a more recent isolate from 2001 (strain 27a) that uses a manufacturing technology of baculovirus expression system to express one region of the virus (VP2 region) where most of the immune response is targeted.

The firm says that Reprocyc ParvoFLEX can be mixed and administered with Reprocyc PRRS EU – a vaccine for active immunisation of breeding females affected with European (genotype 1) porcine reproductive and respiratory syndrome (PRRS). It is approved for use at any stage of gestation and lactation, so it can be introduced to the current PRRS control programmes of sow herds.

PRRS continues to be a highly prevalent disease in pig farms causing economic losses through its negative effects on reproduction and growth, as well as by clinical illness.

The company claims that veterinary surgeons and producers can now control two of the most prevalent reproductive diseases in swine herds simultaneously.