Cookie use on MRCVSonline
We use cookies to ensure that we give you the best experience on our website. If you continue without changing your settings, we will assume that you are happy to receive all cookies.
Accept Policy
Change cookie settings
Ear and dental problems ‘more likely in lop-eared rabbits’ 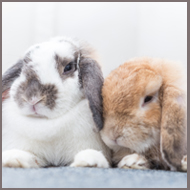 Findings raise concerns about the ethics of breeding popular pet

Rabbits with lopped ears are more likely to have ear and dental problems than rabbits with ears that point straight up, according to new research.

Researchers say the findings, published in Vet Record, raise questions about the ethics of breeding and buying lop-eared rabbits, as they may be more likely to suffer from these conditions.

In the study, researchers examined the teeth and ears of various breeds and ages of 15 lops and 15 erect-eared rabbits from a rescue centre. They also observed their behaviour, looking for signs of pain or discomfort and flinching when being examined.

An analysis of the rabbits’ health records revealed around half of the lops had dental abnormalities and six needed dental treatment, compared with none of the erect-eared rabbits.

‘The welfare consequences of a rabbit having lop ears include pain, as indicated by statistically significantly increased pain responses during examination of lop ears,’ the researchers write. ‘Additionally, the higher frequency of signs consistent with [outer ear] otitis found in the lop-eared compared with erect-eared rabbits, suggest potential for pain [impaired hearing], or even deafness.’

Commenting on the findings, BVA president Daniella Dos Santos, said: “As well as being likely to suffer from ear and dental problems, lop-eared rabbits are also at increased risk of injury and prone to obesity, as for some, the length of their ears can restrict their movement. Sadly, vets tell us that all too often they’re seeing clients who have chosen a pet with certain features without being aware of the serious health and welfare problems they may have as a result.

“It’s critical that prospective owners think ‘health over looks’ when choosing a pet, as extreme features may come hand in hand with hereditary problems that can lead to serious health problems and be distressing and costly to treat. Vets are happy to give advice on how to find a happy, healthy pet and keep them that way.”