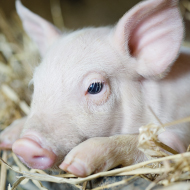 The Code includes improved practices on how to prevent tail biting.

Guidance includes advice on how to prevent tail biting

A new pig welfare code containing updated legal requirements and guidance for producers has been published in parliament.

According to the National Pig Association (NPA), the Code was laid before ministers on Monday and is expected to be approved later this year. It has been developed in consultation with the NPA and other industry bodies, as well as welfare NGOs.

The code has been designed to help keepers in England maintain the standards needed to comply with the relevant legislation. Among the enhanced guidance includes advice on:

NPA chief executive Zoe Davis welcomed the Code, saying that many of the points “represent good common sense and should reflect what all pig keepers do on a daily basis”. But she stressed that some areas of concern remain, particularly with regard to Defra’s intention to move away from farrowing crates.

"Thankfully, we do have a good relationship with the Defra welfare policy team and they are acutely aware of the impact legislation banning the use of farrowing crates would have on our industry,” she said. “We will continue discussions with them about how we can support those who wish to move to free farrowing in future without the need for an outright ban.

“Overall, we endorse the core message that good stockmanship is at the heart of good pig welfare. Producers should now read The Code and ensure they follow it to the best of their ability.”

Defra Animal Welfare Minister Zac Goldsmith added: “As someone who has kept pigs throughout my life I am proud that the UK leads the way on improving animal welfare – whether that be the ban on keeping sows in close confinement stalls or our latest legislation to increase custodial sentences for animal cruelty.

“This new code sets out the highest standards on how to best keep pigs using the latest scientific and veterinary advice to safeguard and enhance welfare standards. I urge all farmers and those in the industry to take full heed of it.

“Our country’s high animal welfare standards are something to be proud of and we will continuously work to ensure they are maintained and improved.”