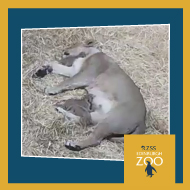 A litter of Asiatic lion cubs has been born at Edinburgh Zoo. At just three weeks old, the cubs are off display and being nursed by their mother, Roberta.

Five cubs were initially born but sadly two did not survive. Staff say the surviving three cubs are doing well but the next few months are crucial.

The cubs will be weighed and sexed at their first health check in the coming weeks, after which they will also be named.

Asiatic lions are endangered, with estimates suggesting there are only 350 left in the wild. Threats include poaching, habitat destruction, conflict with humans and declining prey.