Cookie use on MRCVSonline
We use cookies to ensure that we give you the best experience on our website. If you continue without changing your settings, we will assume that you are happy to receive all cookies.
Accept Policy
Change cookie settings
Study shows wolves are more socially tolerant than dogs 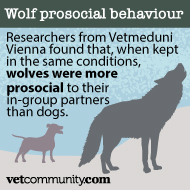 The study found that, when kept in the same conditions, wolves are more prosocial than their domestic counterparts.

Researchers compare the behaviour of dogs and wolves raised in groups

Wolves are more socially tolerant and cooperative with their fellow pack members than dogs, according to new research.

A study published in the journal PLOS ONE concludes that, when kept in the same conditions, wolves are more prosocial to their in-group partners than dogs.

Prosocial behaviour is a type of action that benefits others. It is not a uniquely human behaviour, as studies show that some primates and dogs also have prosocial tendencies.

Some domestication hypotheses suggest that dogs have been selected for their cooperative tendencies, indicating that dogs should be more prosocial than wolves.

Other hypotheses, however, suggest that prosocial behaviour is a trait derived from dogs’ ancestors. Wolves are the closest living relatives of dogs and, because they rely so heavily on cooperation, it has led to the opinion that wolves are more prosocial than dogs.

To investigate this further, researchers from Vetmeduni Vienna compared the prosocial behaviours of six dogs and nine wolves raised in groups by the University’s Wolf Science Centre.

The animals were trained to choose a ‘giving’ symbol, which delivered a food reward to an adjacent receiver enclosure, over a ‘control’ symbol which provided no food reward. The animals could choose between the two options by pressing their nose on a touch screen device.

Researchers found that wolves acted prosocially to in-group partners, providing significantly more food compared to a control where the partner had no access to food.

‘In sum, when kept in the same conditions, wolves are more prosocial than their domestic counterpart, further supporting suggestions that reliance on cooperation is a driving force for prosocial attitudes,’ the researchers conclude.

'The fact that wolves, but not dogs, were prosocial in the same task corroborates other findings that wolves are more tolerant with food sharing, a naturalistic measure of prosociality, than dogs.'