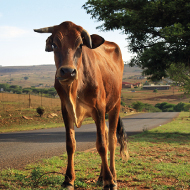 Scientists hope the vaccine will address the current shortfall in availability.

A new affordable vaccine to protect livestock against several serotypes of foot-and-mouth-disease (FMD) has been granted for development by The Pirbright Institute.

Researchers say the new vaccine is more stable than existing FMD vaccines and less reliant on a cold-chain during vaccine distribution - characteristics that give the vaccine greater potential to relieve the burden placed on regions where the disease is endemic.

The vaccine is the result of a long-standing collaboration between Pirbright, the University of Oxford, Diamond Light Source, the University of Reading and MSD Animal Health, who will now be taking the technology into development.

It also marks a significant milestone in years of research to develop a new synthetic vaccine.

“We are proud and excited that our research has resulted in a vaccine that is undergoing commercial development and will have a major impact on the health and wellbeing of those people whose livelihoods have been most severely affected by this devastating disease,” said Professor Bryan Charleston, director of The Pirbright Institute.

“The vaccine’s properties allow for a greater degree of flexibility during production, storage and transportation, which will result in a more affordable solution and therefore better access to those living in areas such as Asia and Africa.”

Unlike inactivated FMD vaccines, the VLPs do not require high containment facilities for production and have been designed to remain stable up to temperatures of 56 degrees celsius, therefore reducing reliance on cold-chain transport and storage.

It is hoped that these factors combined will revolutionise vaccination in areas of Africa and Asia, where the disease continues to circulate.

Defra chief veterinary officer Christine Middlemiss said: “This is a major milestone in tackling the foot-and-mouth disease in the developing countries where it is endemic.

“The increased robustness of this new vaccine has the potential to not only protect livestock but to transform the lives of people whose livelihoods have previously been threatened by this disease. Many people have worked for years to get to this point, and I am delighted to see the vaccine receive its commercial licence.”