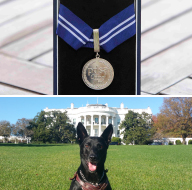 “Hurricane was such a legend within the Service. He loved working and his talent for the job impressed me every single day."
Honour recognises dog’s courage in protecting the president


A US Secret Service dog has been awarded the PDSA Order of Merit for his courage in protecting the president during a security breach at the White House.

Special operations dog Hurricane is the first animal outside the UK to receive the award, which is known as the animal’s OBE.

On 22 October 2014, Hurricane was on duty at the White House when a man vaulted the fence and sprinted across the lawn, towards the area where President Obama and his family were residing.

Initial attempts by the Secret Service canine team to stop the intruder were unsuccessful. Seeing the first struggle, Officer Marshall Mirarchi gave the command to Hurricane, who is famed within his unit for outstanding drive, determination and courage. He made contact with the suspect, intending the push him back to the perimeter fence.

The ensuing struggle saw Hurricane kicked, punched and swung through the air, but the dog kept his jaw locked onto the suspect’s arm. Finally, he grounded the intruder so that armed forces could take him into custody.

Hurricane will officially receive his medal from the PDSA this October, during a special ceremony in London.

Officer Mirarchi worked with Hurricane for four years and adopted him when he retired on medical grounds in 2016.

Commenting on his award he said: “Hurricane was such a legend within the Service. He loved working and his talent for the job impressed me every single day. That night, he stepped up and delivered under circumstances that no amount of training could prepare him for. I have never witnessed such violence toward a dog before but it didn’t stop him from doing his job.

“I am so proud of him and extremely thankful to PDSA for honouring his service and actions in this way. We are very excited to visit London – Hurricane will be given the full VIP treatment, just as he deserves.”