Cookie use on MRCVSonline
We use cookies to ensure that we give you the best experience on our website. If you continue without changing your settings, we will assume that you are happy to receive all cookies.
Accept Policy
Change cookie settings
Scientists fertilise eggs from last two northern white rhinos 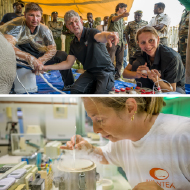 Scientists are hopeful that a viable embryo will develop, which can be frozen and transferred to a surrogate.
World-first procedure offers fresh hope for the species


Scientists are one step closer to saving the northern white rhino from total extinction after managing to fertilise eggs from the last two surviving females.

Najin and Fatu are the last of their species in the world, after the two remaining males - Suni and Sudan - died in 2014 and 2018 respectively. The survival of the species now rests on pioneering artificial reproduction techniques.

A team of vets managed to harvest 10 oocytes from Najin and Fatu at the Ol Pejeta Conservancy in Kenya, a procedure that has never been done in northern white rhinos before. A probe was guided by ultrasound and oocytes harvested from the ovaries whilst the animals were under general anaesthetic.

According to Ol Pejeta, seven out of 10 eggs (four from Fatu, three from Najin) successfully matured and were artificially inseminated using frozen sperm from two bulls, Suni and Saut.

Scientists are hopeful that a viable embryo will develop, which can be frozen and transferred to a southern white rhino surrogate mother. The results of the embryo development are expected around 10 September.

The breakthrough is the result of an international collaboration between the Leibniz Institute in Berlin, Avantea, Dvůr Králové Zoo, Ol Pejeta and the Kenya Wildlife Service (KWS). The cohort said it has taken years of research, development and practice, as the technique and equipment had to be developed from scratch.

Brigadier (Rtd) John Waweru, director general at KWS, said: “"We are delighted that this partnership gets us one step closer to prevent extinction of the northern white rhinos. This is particularly touching given the heartbreaking death of Sudan, the last male, who died of old age last year in Kenya.”

Cesare Galli from Italian laboratory Avantea, added: “Yesterday’s operation means that producing a northern white rhino embryo in vitro – which has never been done before – is a tangible reality for the first time.”