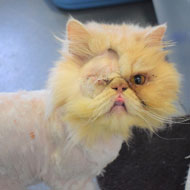 Rucca's eye had become irreparebly damaged due to chronic ulceration.

The charity says that cats, much like their canine counterparts, are needlessly suffering because they have been bred to look a certain way. The warning comes after Battersea took in six brachycephalic cats at its London Rescue centre, with all but the youngest two requiring medical treatment.

Head vet Shaun Opperman said: “At Battersea, we treat our animals for a wide variety of health issues, a number of which are specifically related to how these animals have been bred to look. In an apparent quest to make them look increasingly photogenic or fashionable, these cats can sadly spend their whole lives suffering with a range of health problems ranging from matted fur and eye infections to difficulty breathing and degenerative diseases.”

Four-year-old Persian CeeCee is currently awaiting at Battersea’s London cattery for surgery to help her breathe. When CeeCee first arrived, she was suffering from excessively watery eyes and matted fur.

It did not take staff long to notice that whenever CeeCee moved, her breathing became laboured. Vets are now considering whether to operate on the CeeCee’s nose to widen her nostrils in a bid to make breathing easier for her.

The same vets recently performed surgery on a male four-year-old Persian named Rucca (pictured) to remove one of his eyes, which had become irreparably damaged due to chronic ulceration.

Shaun added: “If it weren’t for the unrelated circumstances that brought these cats to Battersea, they would have potentially continued suffering for the rest of their lives, possibly without their owners ever believing anything was wrong. With many of the pedigree cats that are brought to us, we can see that the owners clearly loved their pets, however, their lack of breed knowledge means that they have unknowingly neglected their care, such as not grooming often enough or failing to consult a vet at the right time.

“As with any type of cat, pedigrees can, of course, make wonderful pets for the right owners, however, we would urge anyone thinking of adding a cat to the family to first consider adopting from a rescue like Battersea."