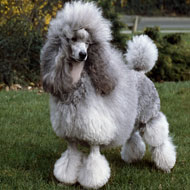 OC in miniature poodles is characterised by abnormalities in cartilage and bone development.

A new DNA testing scheme for osteochondrodysplasia (OC) in the miniature poodle has been launched by the Kennel Club following consultation with the breed’s health coordinator.

OC in miniature poodles is characterised by abnormalities in cartilage and bone development, resulting in severe dwarfism. Symptoms include stunted growth and abnormal movement in puppies as young as three weeks old.

Because the joints become very stiff, many puppies affected by OC are euthanised. While joint stiffness lessens as the dog matures, mobility can remain restricted owing to physical deformities. Adult dogs affected by OC are also at higher risk of osteoarthritis.

In a press release, the Kennel Club said that it constantly reviews DNA testing schemes in conjunction with breed clubs to ensure that breeders are supported in their decisions.

“The Kennel Club works alongside breed clubs and breed health coordinators in a collaborative effort to improve the health of pedigree dogs and is happy to accommodate a club's request to add a new DNA test to its lists,” a spokesperson said. “A formal request from the breed's health coordinator or a majority request from the breed clubs is normally required to do this.”

The Kennel Club said that test results will be added to the dog’s registration details which will trigger the publication of the result in the next available Breed Records Supplement.