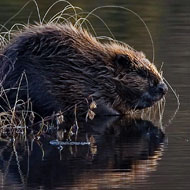 "Granting beavers protected status is an important milestone for the return of the species to Scotland’s lochs and rivers."

Charities welcome move that will enable species to expand its range

A new law has come into force in Scotland giving beavers protected status.

The legislation took effect on Wednesday (1 May) making it illegal to shoot beavers and destroy their dams and lodges without a licence. Conservationists say the move is ‘an important step’ to enable the species ‘to expand its range’.

Welcoming the move, Jo Pike of the Scottish Wildlife Trust said that “beavers are unrivalled as ecosystem engineers.”

She added that “granting beavers protected status is an important milestone for the return of the species to Scotland’s lochs and rivers. It follows decades of work by countless organisations and individuals to demonstrate the positive impacts that beavers can have.”

Barbara Smith of the Royal Zoological Society of Scotland (RZSS) added: “The granting of European Protected Status is a vital step in welcoming beavers back as a natural part of our ecosystem and a most welcome success as part of wider and continued efforts to protect and enhance our natural heritage.”

Scotland is home to around 450 beavers that live in two separate populations (mid-Argyll and Tayside). Beavers and the dams they build have widespread benefits to the environment, including reducing the risk of flooding and increased biodiversity.

The legislation was first announced by environment secretary Roseanna Cunningham in February. But despite being welcomed by conservation charities, some farmers have expressed concern over the negative impact beaver dams may have on their land.

Adrian Ivory, who manages a farm in Perthshire, told BBC News that he had to destroy his crop after beavers built a dam on a nearby waterway.

"The big problem for us with the dams is that it costs me as a business £4,000-£5,000 a year, pulling dams out of watercourses, trying to sort banks out,”. These are problems that we shouldn't really be having to deal with,” he said.

"We are trying to produce quality food for the population to eat and this is just causing real problems and a cost to my business."