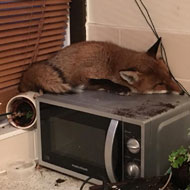 The fox had crawled in through the cat flap to get to the kitchen.
RSPCA tend to fox in family kitchen

A family in Mitcham called the RSPCA after finding a fox asleep on top of their microwave.

Kim Fryer explains how, while at home on 15 December, her daughter found the fox at approximately 7 a.m. and called to her mother for help:

“I came down and spotted this little fox curled up on top of the microwave!

“I have five cats and a dog so obviously I have a cat flap. He must have crawled under the gate and through the cat flap.

“A couple of my plants were smashed and there was mud everywhere.

“She put the light on and one eye opened but he didn’t move. We could tell there was something wrong with him.”

Having called the RSPCA, inspector Phil Norman transported the fox to the RSPCA Putney Animal Hospital in London.

Upon initial presentation, the fox appeared lethargic and very weak, but soon brightened up and no abnormalities were found.

A hospital spokesperson stated: “He had got in through the cat flap and found a nice warm spot to sleep in. He was quite happy to be brought into the hospital for a health check but was understandably not keen on being in a cage.

“Fortunately, he was quite healthy with a beautiful fluffy coat, so after a thorough check over, he was released back to the area he was found in by one of the hospital staff. Good luck Mr. Fox!”