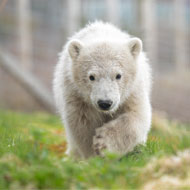 Hamish is expected to play a vital role in the European endangered species programme.

Keepers at RZSS Highland Wildlife Park are celebrating the first birthday of Hamish the polar bear.

On 18 December 2017, Hamish became the first polar bear cub to be born in the UK for 25 years. Since then, he has attracted more than 200,000 visitors to the park - almost double that of previous records.

To celebrate Hamish’s special day, the park gave visitors with the same name free entry and keepers made him a special birthday cake made from ice.

Head carnivore keeper Una Richardson said: “It has been an incredible year and we’re really excited to be celebrating Hamish’s first birthday today.

“Our mischievous cub has grown so much since he took his first steps outside in March and is rapidly catching up to his mum, Victoria, although he still has some way to go until he reaches his full adult size, as male polar bears can weigh up to 800 kilograms.”

Polar bears stay with their mothers in the wild for up to three years, after which they leave to start their own families. Keepers hope that when Hamish is ready to leave his mother, her will pay a vital role in the European endangered species programme.

RZSS chief executive said: “Hamish’s arrival has helped us to highlight the threats that many wild animals are facing and the small changes we can make to really make a big difference.

“As a wildlife conservation charity, we believe we have a duty to help protect this magnificent species which is predicted to significantly reduce in numbers over the next 40 years as the reduction in sea ice, the polar bear’s primary seal hunting platform, continues.

“Our polar bears are part of the European Endangered Species Programme and we hope when Hamish is older, he will help to reinforce the captive population, which may be needed in the future to help support and restore a markedly reduced and fragmented wild population.”