MRCVSonline cannot control these cookies from outside sources and we advise you to check with the relevant third party for more information..
Puppy undergoes world-first combination surgery 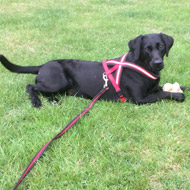 Eleven-month-old Lottie was found to have a very loud heart murmur during a routine check-up at her local vets.

The Royal Veterinary College (RVC) has carried out a world-first combination surgery to repair a complex combination of heart defects in a dog.

Eleven-month-old labrador Lottie was found to have a very loud heart murmur during a routine check-up at her local vets. An ultrasound revealed that she had several congenital heart defects. Two were a malformation of her tricuspid valve and the other was a large defect of the common atrium.

Lottie was referred to the RVC’s cardiothoracic department for further analysis. Led by small animal surgeon professor Dan Brockman, the team is renowned for its cutting-edge surgeries, including a world-first treatment to save a dog with a malformed tricuspid valve.

Repair of the tricuspid valve has only been performed a few times and has never been carried out at the same time as the repair of a common atrium. Lottie’s owners decided to proceed with surgery to improve her quality of life.

The operation took place in July and Lottie has her heart stopped to perform the surgery. Circulation to the rest of the body was maintained with the use of a heart-lung machine operated by a perfusionist from Great Ormand Street Hospital.

Poppy Bristow, fellow in cardiothoracic surgery at the RVC, said: “Altogether 10 people were involved in her operation and many more for her care before and after surgery, including veterinary specialists, veterinary nurses and veterinary specialists-in-training from surgery, cardiology, anaesthesia and emergency and critical care, as well as Lottie’s referring cardiologist and her local veterinary practice.

“Lottie’s heart was stopped for an hour and a half, with the whole operation taking four hours. Her malformed tricuspid valve was released by cutting its abnormal attachments and artificial chords using Gore-Tex material were placed.

“Her single atrium was then divided into two using a large patch of Gore-Tex. Lottie has made a good recovery so far and was walking around and eating from the day after her surgery. She was discharged back to her owners after six days and has continued to thrive at home.”

Professor Brockman added: “In Lottie, we had a young energetic dog with such a serious and life-limiting heart condition, that we were desperate to try and help her. The repair was complex but incorporated a combination of surgical manoeuvres that we had done before.

“With careful pre-operative planning and using our previous experience, we were able to design and execute the surgical treatment. It is still ‘early days’ but the initial signs suggest that Lottie is going to enjoy an excellent quality of life, following this operation and, we all hope, a normal lifespan.”