MRCVSonline cannot control these cookies from outside sources and we advise you to check with the relevant third party for more information..
Is this really a risk worth taking? 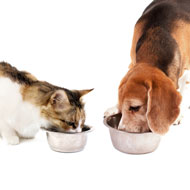 A US study revealed 66 of 576 samples of raw dog or cat foods tested were positive for Listeria.

Should veterinary professionals be warning of the zoonotic risks of raw pet foods?

The Foods Standards Agency (FSA) has just published its ‘Food and You 2014’ survey report, based on information about peoples’ behaviours, attitudes and knowledge relating to food safety issues. It should prompt veterinary professionals to consider the advice they give to clients about feeding raw meat and poultry to their pets.

The survey, based on a sample of 3,453 interviews, provides data on people’s reports of their food purchasing, storage, preparation, consumption and factors that may affect these, such as eating habits, influences on where respondents choose to eat out and experiences of food poisoning.

Eight out of ten respondents reported cleaning behaviours in line with recommended practices, saying they always washed their hands before starting to prepare or cook food and after handling raw meat, poultry or fish.

Around half (51%) of those who reported storing raw meat and poultry in the fridge reported practices in line with those recommended to avoid cross contamination; and 49 per cent said they always used different chopping boards for different types of food.

Set against this FSA report, an article published in the September edition of Foodborne Pathogens and Disease entitled, ‘Investigation of Listeria, Salmonella, and toxigenic Escherichia coli in various pet foods’, should ring some alarm bells.

Not surprisingly, the authors conclude that consumers should handle these products carefully, being mindful of the potential risks to human and animal health.

The BARF (Biologically Appropriate Raw Food) and RMB (Raw Meaty Bones) lobbies and proponents of prepared pet foods continue to debate the health implications of their particular approaches to nutrition and the respective weight of scientific supporting data.

Irrespective of this, isn’t there a more fundamental question as to the wisdom of introducing potentially contaminated food sources into the kitchen, unnecessarily, in the first place? And shouldn’t veterinary professionals be taking the lead in warning clients about it?