MRCVSonline cannot control these cookies from outside sources and we advise you to check with the relevant third party for more information..
Retired Police dog pulls through after emergency surgery 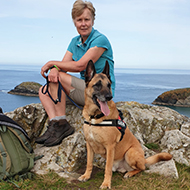 Retired Ministry of Defence Police Dog Flint, an 11-year-old Belgian Malinois, has pulled through after a life-saving operation.

Flint, who comes from a line of police dogs, was matched with his handler Karen Crossley at nine weeks old in December 2010, and spend six years keeping nuclear submarines safe and secure.

Karen explained: “He spent his whole working life at Devonport where we patrolled the dock areas where the nuclear submarines underwent repairs and refits, and the seawalls where the naval ships would berth.”

After his retirement in 2018, Flint stayed with Karen, and enjoyed his life as a pet. However, this June, Flint began acting strangely, waking up suddenly and running outside. Karen noticed that his back was hunched and that he was attempting to vomit.

Noticing that Flint's stomach was starting to bloat, Karen rushed him to the veterinary clinic. The vet confirmed that Flint has a twisted stomach, and that an emergency operation was necessary.

Flint had already gone into shock, and even though the operation was a risk at his age, it was essential – but a touch-and-go situation, with great uncertainty if he would survive it.

Thankfully Flint survived and began to recover. Karen said: “We don’t know why it happened but I understand that when they’re laying down gas can build up and cause their stomach to twist.

“I’m just so relieved that he made it through and that we got to bring him home.”

With the emergency vet bill of £2,000, retired police dogs are unable to be insured due to their working past.

UK-based charity the Thin Blue Paw Foundation stepped in to cover the cost of Flint's treatment. The organisation provides financial assistance and support to people who take on retired police dogs, owing to the dogs' uninsurability due to their active and strenuous past.

“He deserves to have the best life now he’s retired and I’m committed to making sure he gets that,” Karen added.

“But I couldn’t do it without the Thin Blue Paw Foundation and I’m so grateful to them for their support and for saving Flint’s life.”