MRCVSonline cannot control these cookies from outside sources and we advise you to check with the relevant third party for more information..
Royal Redwings foal enjoys first frolic 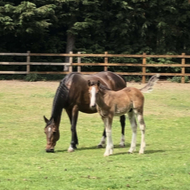 Monarch and Majesty celebrated their own royal occasion - Monarch's first turn out.

Young Monarch is progressing well after a traumatic start in life.

A foal born at Redwings Horse Sanctuary has royally enjoyed his first turn out on grass, just in time for the Queen's Jubilee celebrations.

Monarch, born at Redwings and named in honour of the Queen's 70th anniversary, experienced grass for the first time at one of the charity's Norfolk sites.

Monarch's mother, an 11-year-old mare named Majesty, came into the care of Redwings after being hit by a car in Essex whilst pregnant. Majesty had suffered a broken nose and chest injuries, and was discovered stuck in some railings on the central reservation.

Nicola Berryman, welfare veterinary surgeon at Redwings, commented on the regal pair's ordeal: “It’s wonderful to see them both doing so well after all mum Majesty went through, and the tricky start mum and foal had when Monarch was born.

“They had some initial problems with him feeding and needed a little bit of extra help and support, which does sometimes happen with the mares who come into us in foal.

“He’s a strapping boy, who’s growing quickly who will soon tower over his mum!

“We were all overjoyed when Monarch was born, and we know those who have followed their story so far will love to see them galloping together and frolicking in their new field.”

The charity is asking the public to consider donating to the cause, so that more horses like Majesty and Monarch can receive a second chance at life. Any donations can be made via the Redwings website.