MRCVSonline cannot control these cookies from outside sources and we advise you to check with the relevant third party for more information..
Study reveals insights into role of muscles and tendons 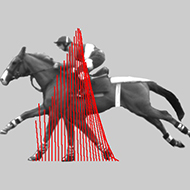 Fast animals produce nearly vertical forces, with their feet ‘sliding’ under their hips and shoulders. Like wheels or a skate, this is an economical way of moving while supporting body weight.

Findings could enable different approaches to surgery, rehabilitation and prosthetics.

New therapies for humans and animals could be made possible thanks to a study by the RVC that reveals insights into the understanding of muscles and tendons.

Findings published in the

Journal of Experimental Biology reveal how muscles and tendons work in unison to transfer weight without wasting energy. Researchers hope the discovery could lead to better-informed choices regarding surgery, rehabilitation and prosthetics.

Forming an essential component of anatomy, muscles and tendons can be compared to the structure of a bicycle. For example, the muscles are like a motor, powering movement, while the tendons are the transmission, acting like a bicycle chain. In the study, researchers highlight the ‘tricks’ by which muscles and tendons support bodyweight during horizontal motion while avoiding mechanical work - effectively acting as the wheel and bicycle spokes.

To achieve this, the team interpreted animal structures through the lens of classic linkage mechanics, as well as considerations for muscles’ abilities and limitations. They also used LEGO® and lollipop sticks to build models revealing the four-bar and six-bar linkages (those with pin joints connecting four or six ‘bars’ made of bones or muscles), and how different muscles become engaged at different times through simple changes in geometry.

The team found that animals avoid a lot of unnecessary work when running by sliding their hips and shoulders over their feet. Muscles, tendons and bones allow this action by forming various linkages where the links – which act as the bicycle spokes – do not change length when loaded by bodyweight.

Traditionally, much focus has been placed on the importance of the elastic recoil in tendons. However, researchers believe that an improved understanding of the linkages could better inform choices regarding surgical approaches, rehabilitation programmes and prosthetic designs.

They add that where previously ‘springy’ tendons and legs were viewed as the key to efficient locomotion, now the ‘sliding’ and linkage aspects should be viewed more prominently - perhaps as the dominant factor to economical locomotion.

Study lead Professor Jim Usherwood, Wellcome Trust Senior Research Fellow at the RVC, explained: “It has been known for 40 years that running animals manage to ‘slide’ their bodies over their feet and that this could be an economy trick, just like a wheel or skate allows weight forces to be carried during horizontal motion.

“What has been missing is how the muscles manage to achieve this without wasting a huge amount of energy pulling against each other. By spending plenty of time with a puppy, lots of LEGO®, and a computer, I was able to identify some of the linkages involved – and these linkages have been known about since the Industrial Revolution.”

The study was funded by the Wellcome Trust.