MRCVSonline cannot control these cookies from outside sources and we advise you to check with the relevant third party for more information..
Amphibian study reveals parental care influence on offspring 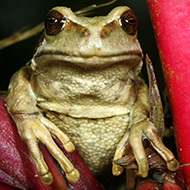 The marsupial tree frog (Gastrotheca riobambae) has a unique breeding behaviour in having a pouch to carry eggs and tadpoles in.

Females that abandon their young tend to produce a large number of small eggs.

A new study led by researchers at Queen’s University Belfast has uncovered the various ways that amphibians care for their young determine how many eggs they lay.

When amphibians lay their eggs, the majority desert their young. Among those amphibians that do stick around, parental care can vary significantly.

Writing in PLOS Biology, researchers show for the first time that certain species with parental responsibilities, such as the marsupial frog, invest differently in egg and clutch size than species that abandon their young, such as the common frog.

The team analysed some 800 species of amphibians from across the globe and found that amphibians that possess direct development and lay their eggs on land had smaller clutches and bigger eggs.

Their study also revealed that some elements of parental care and the habitat in which eggs and tadpoles develop define how many eggs females lay and how big they are. For example, larger eggs take more energy from the mother to produce and therefore arrive in small clutches.

The study also found that since predators eat eggs, females that abandon their young tend to produce a large number of small eggs. If the eggs are being looked after by the mother, father or both parents, mothers alter the numbers and size of eggs they lay.

How many eggs and how big they are is ultimately dependent on the type of care provided by the parents, researchers said.

“Our work in this study demonstrates that species such as some Malagasy poison frogs with terrestrial eggs have larger eggs in smaller clutches, but different forms of parental care have different influence on the trade-off between egg size and egg number,” commented lead author Dr Isabella Capellini.

“For example, species that brood their eggs or tadpoles on or inside the body, can only care for few large eggs likely because the parent’s body has limited room. However, those that guard their eggs, can afford to protect larger eggs without reducing clutch size.

“Instead, frogs that feed their larvae have few small eggs, probably because constant feeding after hatching makes producing initially large eggs unnecessary. These results have important implications as they demonstrate that considering the diversity in care forms is important.”

More than 40 per cent of the world’s amphibian population is at risk of extinction, with their decline exceeding any other group of animals on the planet.