MRCVSonline cannot control these cookies from outside sources and we advise you to check with the relevant third party for more information..
Sweet rescue ponies in joyous reunion 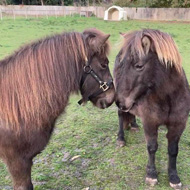 Treacle and Candy are said to be "totally joined at the hip".

Treacle and Candy are together again after five years apart.

Two Blue Cross rescue ponies have been reunited and are “living their best life” in Oxfordshire after being separated for five years.

Bay mares Treacle and Candy are once again sharing their hay as if "they've never been apart”, said their owner Joanna Robins.

The ponies were taken in by Blue Cross in 2011 as part of a large welfare-compromised group in poor condition.

Initially, the charity rehomed the duo with the same owner for five years. However, a change in the borrower's circumstances meant the ponies had to be returned to the charity and rehomed separately.

“Fast forward another five years, and Treacle was once again returned to Blue Cross,” explains Lauren Bush, horse rehoming coordinator at Blue Cross in Burford. “Candy's owner Joanna Robins spotted Treacle on the rehoming page of our website and got in touch straight away. We were thrilled to reunite this pair, and they very much remembered each other, which made it even more special.”

Joanna also owns another Blue Cross pony called Bubbles and had been keeping a close eye on the Blue Cross website for a suitable companion.

“I was amazed when I found Treacle on the rehoming page,” she said. “I had initially met her when I went to collect Candy five years ago - at the time she was going out to a new home. I instantly recognised her on the page as she is so like Candy.

"It didn’t take long to decide that she had to come and live with us - she and Candy had lived together as a pair for five years and always been in the same herd, so I was sure it was the right thing to do!”

After all the usual checks, Joanna collected Treacle and brought her home.

“I was slightly nervous that they wouldn’t remember each other, so decided to introduce them initially with a fence between them. I needn’t have worried. Candy was so excited to see Treacle, she just couldn’t contain herself! She tore around the field just stopping occasionally to have a sniff before she took off again.

“I quickly decided they were fine to put in together, and their joy at being reunited was just lovely to see! They followed each other around, so excited to be back together. There was a little bit of herd placement that took place because of our other Blue Cross Shetland Bubbles, but it soon settled down. Treacle and Candy are now living their best life, totally joined at the hip and sharing their hay, like they’ve never been apart!”