MRCVSonline cannot control these cookies from outside sources and we advise you to check with the relevant third party for more information..
Hermit crab behaviour affected by microplastics 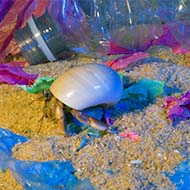 "This study shows how the microplastic pollution crisis is threatening biodiversity more than is currently recognised" - Mánus Cunningham.

The microplastics impede the crabs' ability to attack and defend.

New research from Queen's University Belfast has discovered microplastics affect hermit crabs' ability to fight during shell fight contests, which are vital for the species' survival.

The study expands upon previous research by Queen's University which demonstrated that hermit crabs were less likely to touch or enter high-quality shells when exposed to microplastics.

Published in Royal Society Open Science, the study explores how hermit crabs' behaviour is effected when exposed to microplastics, and discovered that the microplastics impair both the attacking and defending behaviour of hermit crabs during contests, affecting their ability to secure the larger shell necessary for growth and survival.

Crabs exposed to the plastic displayed weaker attacking behaviour during fights than those not exposed to plastic, and it was found that the microplastics also reduced the crabs' defending ability to properly assess their attackers during contests.

Mánus Cunningham, one of the paper's lead researchers, commented: “These findings are hugely significant as they illustrate how both the information-gathering and shell evaluations were impaired when exposed to microplastics.

“Although 10% of global plastic production ends up in the ocean, there is very limited research on how this can disrupt animal behaviour and cognition.

“This study shows how the microplastic pollution crisis is threatening biodiversity more than is currently recognised.”

Dr Gareth Arnott, principal investigator of the project, added: “This study provides an insight into the potential for microplastics to alter important aspects of animal behaviour that are critical for survival and reproduction.

“We need to further investigate how microplastics affect their behaviour and the consequences, armed with this knowledge to advocate for change to protect our ecosystem.”