MRCVSonline cannot control these cookies from outside sources and we advise you to check with the relevant third party for more information..
FSA issues feline pancytopenia update 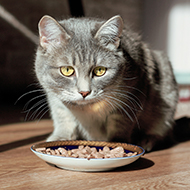 'No causative link between pancytopenia and the recalled food has been established.'

The Food Standards Agency (FSA) has issued an update on the recent rise in cases of feline pancytopenia.

In the update, which addressed a number of commonly asked questions, the Agency confirms that no causative link has been found between feline pancytopenia and the recalled cat food products.

In the tests of the recalled food run by the FSA, higher levels of mycotoxins were identified in some samples, including T2 and HT2 compounds.

As mycotoxins are found in some feed and do not indicate that they are the cause of feline pancytopenia, the FSA has said that 'no causative link between pancytopenia and the recalled cat food products has been established.'

In the update, the FSA outlined the next steps in the feline pancytopenia investigation as a continued investigation into the cause of the rare condition, which will take the form of a multi-agency approach.

A 'frequently asked questions' section in the update advises pet owners to continue to follow the advice in the original recall notice, and reassures pet owners of the FSA's continued commitment to the investigation.

The full update can be read at https://www.food.gov.uk/news-alerts