MRCVSonline cannot control these cookies from outside sources and we advise you to check with the relevant third party for more information..
Dog receives life-changing spinal surgery 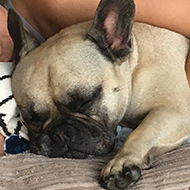 Milo is now fully recovered and back on all fours.

French bulldog Milo is fully recovered after the ordeal.

Specialist vets have carried out life-changing spinal surgery on a French bulldog, to enable him to walk again.

Five-year-old Milo was paralysed in all four legs, and in great pain, when he was referred to Cave Veterinary Specialists, a Somerset animal hospital, as an emergency case.

Milo is now fully recovered and back on all fours after he received expert care from neurology specialists Simon Bertram and Tom Cardy at Cave, the Linnaeus-owned referral centre.

“Simon was so informative and straight to the point and I couldn’t have felt more reassured when we left Milo with him. Tom managed our follow up appointments and honestly his service and Simon’s have been second to none!

“Best of all, Milo is now home again and back to his usual cheeky self. He really is a one in a million and is famous in Appledore where people recognise him over me!”

Morgan admitted that she was very worried about Milo's chances of survival, saying: “I was hideously concerned about him and thought that perhaps I would have had to put him to sleep due to the severity of his condition.

“I was very sad and worried for his ongoing life and how much he would be able to do in the future but everything has turned out so well.”

Simon Bertram, Cave's neurology specialist, led Milo's case. Revealing the full extent of Milo's problem, he said: “Milo was referred to us at Cave as an emergency and when he arrived, he was unable to walk without help, showing paralysis of all four legs and had a very painful neck.

“He immediately underwent an MRI scan which showed an intervertebral disc in his neck had slipped and that there was a marked compression of his cervical spinal cord causing the paralysis.

“After discussions with Morgan we decided to move him straight to the operating theatre to give him the best chance to make a quick, pain-free and full recovery.

“The surgery was successful with all the slipped-out material removed to relieve the compression of the spinal cord and the results were almost immediate. After the surgery the pain was gone and the next day he was walking without help again.

“Milo continued to make a speedy recovery and was able to go home a day later and now he is back out and about again without any problems.”