Cookie use on MRCVSonline
We use cookies to ensure that we give you the best experience on our website. If you continue without changing your settings, we will assume that you are happy to receive all cookies.
Accept Policy
Change cookie settings
Survey reveals attitudes towards farm animal health and welfare 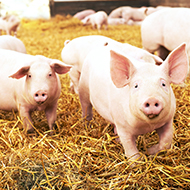 Both farmers and members of the public said that health provision was the most important factor when it comes to assessing animals' overall wellbeing.

SRUC reseacrhers compare the views of farmers and members of the public.

Farmers and the public want farm animals to be healthy and able to express their natural behaviours, according to new research.

There is a general belief that farmers emphasise keeping animals healthy, while the public is more likely to want animals to be able to exhibit natural behaviours. But this study, published in Frontiers in Animal Science, found more similarities than differences when comparing the views of the two groups.

Besides wanting animals to be able to express natural behaviours, responses from both groups imply that the level of health provision is the most important factor when assessing animal wellbeing. However, the study found that farmers judge situations where health issues are not minimised, but natural behaviour is supported, more negatively than the public.

The survey of more than 168 farmers and 800 members of the public also found that sector, production system and farming background affected farmer attitudes towards the importance of health and natural behaviours. There were also discrepancies in attitudes among the public, with being vegetarian, vegan or flexitarian increasing the likelihood of highly rating natural behaviours as important.

Study co-author Dr Belinda Vigors, a social scientist at SRUC, commented: “This study shows that although there are differences between farmers and members of the public, there are also some key similarities.

“Importantly, it is very clear both farmers and the public want farm animals to be both healthy and able to express their natural behaviours. The findings of the study are relevant to better understanding the expectations of farmers and members of the public and what they consider is important for animal welfare.”