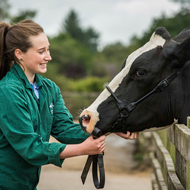 SRUC plans to open a new vet school in Scotland.

Scotland’s Rural College (SRUC) has announced plans to create a new veterinary school that, if given the go-ahead, could become Scotland’s first new school of veterinary medicine since the 19th Century.

Under the plans announced today (28 May), SRUC will offer courses in veterinary medicine ranging from Higher National Diploma to postgraduate degree level. The school would be based in Aberdeen, making it the first outside of Edinburgh or Glasgow in more than 150 years.

A fundamental aim of the school would be to address existing shortfalls in areas such as veterinary practice, food production, food safety and animal and public health. It plans to achieve this by using work-based teaching to align student recruitment and employability in shortage areas that are essential to Scotland’s valuable rural and food sectors.

A working group will be formed to progress the plans, chaired by Professor Sir Pete Downes, a former principal and vice-chancellor of the University of Dundee. He will be joined by Sheila Voas, Chief Veterinary Officer for Scotland, former NFUS President Nigel Miller, SRUC Board member Jane Craigie, and Dr Kate Richards, junior vice president of the RCVS.

Findings from a report conducted by BiGGAR Economics show that the new school could add £26m GVA and 242 jobs to the Scottish economy by 2030.

SRUC principal and chief executive Professor Wayne Powell, said: “We are an ambitious institution with a bold vision for the future. This is a ground-breaking model to expand access to educational opportunities and broaden the range of potential students who would not ordinarily be able to attend a vet school. It will also help solve existing skills shortages across Scotland.

“We see a key role of the new vet school in sustaining primary agriculture and hence food and drink productivity, with the welfare of both livestock and companion animals at its heart. The school will produce champions for best-in-class animal welfare in support of these industries, which will help improve productivity, effectiveness, and sustainability.”

RCVS director of education Linda Prescott-Clements, added: “The RCVS looks forward to working with the team at SRUC as it moves towards meeting our accreditation standards so that its future graduates can join the UK veterinary profession.”