MRCVSonline cannot control these cookies from outside sources and we advise you to check with the relevant third party for more information..
Salmonella study reveals how genetic changes alter disease risk 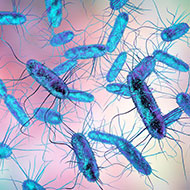 The U288 variant was found to have undergone a unique set of genetic changes, most likely between 1980 and 2000.

A new study from the Roslin Institute and the Quadram Institute has found that two closely related variants of salmonella typhimurium have significantly different effects on pig health compared to other animals and humans.

The study, published in the journal Communications Biology, analysed the genetic makeup of salmonella strains found in pigs and people over a number of years, with the aim of identifying variants and understanding how they evolved and behave.

The two variants, named U288 and ST34, were predominantly found in pigs and differences were found in both variants' colonisation of the intestine and surrounding tissues as well as the severity of disease they created.

According to the researchers, the ST34 variant accounts for more than half of all salmonella typhimurium infections in people, while the U288 variant is rarely associated with human infection.

The U288 variant was found to have undergone a unique set of genetic changes, most likely between 1980 and 2000. It evolved to obtain genes associated with antimicrobial resistance, as well as variations in molecules connected to virulence.

The researchers suggest that these changes could hold the key to understanding how this variant interacts differently with pigs during infections and in the food chain.

Professor Mark Stevens from the Roslin Institute said: “Understanding how variants of Salmonella emerge and pinpointing the genetic signatures responsible for adaptation to different hosts and the ability to produce disease will provide opportunities to improve diagnostics and surveillance. In turn this will help to predict the risk that Salmonella variants pose to animal health and food safety.”