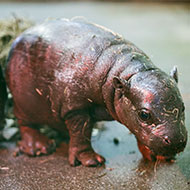 Staff at Edinburgh Zoo plan to name the tiny calf in the coming weeks.

The Royal Zoological Society of Scotland is celebrating the birth of an endangered pygmy hippo calf at Edinburgh Zoo.

The female calf was born on Saturday 17 April to parents Gloria and Otto, weighing just 5.4kg at birth. Zoo staff will be closely monitoring the family as they begin gradually allowing visitors to view the animals.

“As she is still so young, we are limiting opening hours and numbers in our indoor viewing area to give the calf and mum Gloria some time to get used to visitors. The first 30 days are critical for her development, so we’ll be keeping a close eye on them both at this sensitive time and plan to name her in the coming weeks.”

Pygmy hippo populations are declining rapidly in their native home of West Africa, most commonly as a result of habitat destruction caused by logging, farming and human settlement.

The Royal Zoological Society of Scotland (RZSS) supports the species through the European Endangered Species programme – a population management programme for animals of the European Association of Zoos and Aquaria (EAZA). It has also published the first ever genomic study of pygmy hippos through work in the RZSS WildGenes laboratory.

Edinburgh Zoo welcomed back visitors from across the UK on 26 April, with a number of safety measures in place.