Cookie use on MRCVSonline
We use cookies to ensure that we give you the best experience on our website. If you continue without changing your settings, we will assume that you are happy to receive all cookies.
Accept Policy
Change cookie settings
Highland Wildlife Park celebrates birth of endangered Przewalski's horse foals 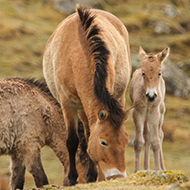 The foals (pictured) were born in April and are both doing well.

Species has been brought back from extinction thanks to rewilding projects.

Following several successful rewilding and reintroduction projects, the Przewalski’s horse has been brought back from extinction in the wild, and has even been reintroduced to its native habitats in Mongolia.

The foals, which were born in April to mothers Tuya and Ieda, are doing well and can be seen wondering around the drive-through reserve.

Keith Gilchrist, animal collection manager at Highland Wildlife Park, said: “[The foals'] arrival represents a potentially important contribution to the future of this Endangered species, who have gone from being extinct in the wild to once again roaming their native habitat.

“This huge feat and is directly attributable to the efforts of the zoo community and the successful reintroduction of this species shows just how important a carefully managed captive population is to restoring and safeguarding the future of animals.”

Highland Wildlife Park reopened to the local public on 26 March and then to visitors from the rest of the UK on 26 April.

The Przewalski's horse foals are the first births at the park this year and staff expect more species, including their European bison and red deer, to give birth in the coming month.