MRCVSonline cannot control these cookies from outside sources and we advise you to check with the relevant third party for more information..
Animal welfare improvements do not necessarily improve public opinion, study finds 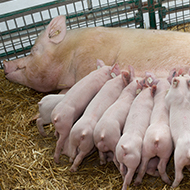 A new study, which has used a comprehensive approach to assess the impact of husbandry changes on farm income, public attitudes and animal welfare, has found that measures to improve animal welfare do not automatically effect public opinion.

In response to public concerns about animal welfare, the pig farming sector introduced new measures to focus on single aspects of animal welfare concerns, rather than multiple aspects,  however these changes did not improve public opinion.

The new study – published in the Universities Federation for Animal Welfare (UFAW) journal Animal Welfare – was carried out in the Netherlands. Researchers evaluated animal welfare measures in terms of their effect on animal wellbeing, farm income and public attitudes.

Four common areas of concern in pig husbandry were defined – piglet mortality, tail biting and the indoor housing of gestating sows. Researchers assessed four husbandry changes within each area, including camera surveillance of farrowing, tail docking with analgesia, and provision of straw.

A simulation model was created to estimate and compare the effects of each of these measures for animal welfare, farm income and public opinion.

The results showed that even the most efficient measure in terms of welfare – that which included straw provision, daylight and increased group sizes for gestating sows – still had a low effect on public attitudes.

Ultimately, researchers concluded from the results that measures which improve animal welfare do not necessarily equate to the same degree of improvement in either public attitudes or farm income.

Co-author of the study Dr Tamara Bergstra said: “Our findings indicate that it is essential to use a more comprehensive approach for evaluating animal welfare measures that integrate animal welfare, farm income and public attitudes.”