Cookie use on MRCVSonline
We use cookies to ensure that we give you the best experience on our website. If you continue without changing your settings, we will assume that you are happy to receive all cookies.
Accept Policy
Change cookie settings
Platypus habitat has shrunk by 22 per cent in 30 years, study finds 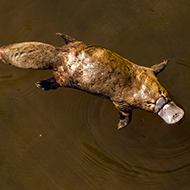 Researchers state that climate change and it's effect on rivers present a serious risk to the future of platypus populaitons.

Researchers from the University of New South Wales (UNSW), Australia are urging the Australian government to list the platypus as a threatened species, after research found that the animals habitat has shrunk by 22 per cent since 1990.

The platypus is currently listed as 'near-threatened' on the International Union for Conservation of Nature (IUCN) Red List. However it is not listed as threatened under Australia’s Environment Protection and Biodiversity Conservation (EPBC) Act.

A team of researchers from the Centre for Ecosystem Science (CES) at UNSW found that the area of Eastern Australia where platypuses are found has shrunk by up to 22 per cent – about 77,000 sq miles – over the past 30 years.

“We recorded the most severe declines in platypus observations in NSW – particularly in the Murray-Darling Basin, where natural river systems and water flows have been the most heavily modified,” said lead author Dr Tahneal Hawke.

The team cited disruption of habitat, extreme droughts and introduced predators as some of the major threats affecting the species. It added that listing the platypus as 'threatened' would prioritise monitoring and protection of the animal and it's habitat.

The UNSW researchers have submitted their recommendations to the Commonwealth and NSW Government’s scientific committees, in collaboration with the Australian Conservation Foundation, WWF Australia and Humane Society International Australia.

Lead author Professor Richard Kingsford said: “We have a national and international responsibility to look after this unique animal and the signs are not good. Platypus are declining and we need to do something about threats to the species before it is too late.”