Cookie use on MRCVSonline
We use cookies to ensure that we give you the best experience on our website. If you continue without changing your settings, we will assume that you are happy to receive all cookies.
Accept Policy
Change cookie settings
RSPCA reports more than 2200 incidents of cruelty to wildlife in 2020 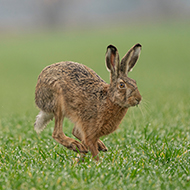 The RSPCA is urging the public to be vigilant and report any suspicious behaviour to the RSPCA cruelty line or the police.

Charity fears spike in cruelty to wildlife during second lockdown

The RSPCA has expressed concerns over a rise in incidents of cruelty to wildlife as England enters a second lockdown. These fears come as a result of new data, showing that the charity has received more than 2200 reports of wildlife cruelty in 2020 so far, spiking in May.

RSPCA national wildlife co-ordinator Geoff Edmond said: “Our data shows that reports of cruelty to wildlife surged during the first lockdown. We fear a similar peak could happen all over again during this second lockdown, as some people again look for savage ways to pass the time.

“Our inspectors see first-hand the suffering inflicted by criminals on animals through wildlife crime such as badger baiting, dog fighting, hare coursing and trapping birds.”

According to Mr Edmond, police forces reported an increase in anti-social behaviour during the first lockdown. The RSPCA is concerned that the stress and frustration that lockdown brings may lead some people to seek ‘entertainment’ through these horrible acts of cruelty towards animals.

The RSPCA has already responded to thousands of incidents of cruelty to wildlife this year. Just last month, the charity was called out to help a badger in Nantwich, Cheshire that had severe wounds, most likely from an illegal badger-baiting attack. In September, RSPCA veterinary staff successfully operated on a swan which had been shot in the neck with an arrow.

Mr Edmond concluded: “There is no place for cruelty to animals in today’s society and we urge anyone who spots anything suspicious when out on their daily exercise or sees anything online to report it to the RSPCA’s cruelty line or their local police force.”