Cookie use on MRCVSonline
We use cookies to ensure that we give you the best experience on our website. If you continue without changing your settings, we will assume that you are happy to receive all cookies.
Accept Policy
Change cookie settings
Novel approach to amoebic gill disease in salmon could benefit humans 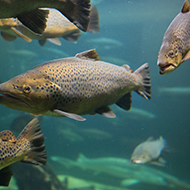 Researchers at the University of Glasgow are developing a novel approach to the treatment of amoebic gill disease that could drive down the cost of drugs currently used to treat parasitic diseases in humans.

In the study, scientists propose to repurpose drugs used to treat human parasitic diseases, such as sleeping sickness, Chagas disease and leishmaniasis, to manage AGD in Atlantic salmon.

Using the University's 'drug discovery pipeline', researchers propose to test the potency of these drugs against Neoparamoeba perurans. The team will then test a candidate drug for activity against ADG in Atlantic salmon at a marine trial site in Ireland.

Researchers hope that by opening new markets for these drugs, it will drive down the cost of parasitic treatment in humans, particularly in the developing world where unaffordable healthcare can lead to millions of unnecessary deaths.

Study co-author Dr Martin Llewellyn, said: “This project is a great opportunity to understand some of the science behind symbiosis, develop a much-needed drug for salmon aquaculture and also hopefully have a beneficial impact on the treatment of diseases that impact the lives of hundreds of millions of people in the tropics.”

Funded by the BBSRC, the project will involve a collaboration with the Marine Institute, Ireland and Dalhousie University, Canada.