Cookie use on MRCVSonline
We use cookies to ensure that we give you the best experience on our website. If you continue without changing your settings, we will assume that you are happy to receive all cookies.
Accept Policy
Change cookie settings
Dogs have been a ‘lifeline’ for owners during lockdown, research reveals 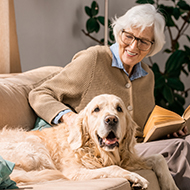 More than a third of owners surveyed said that having a dog by their side during the pandemic made them less anxious.

Pets provide comfort and routine during time of crisis

New data from The Kennel Club has shown that dogs have helped to reduce loneliness and improve owner’s mental wellbeing during the COVID-19 pandemic.

The research, carried out in July 2020, revealed that long-term were comforted by their pets during stressful periods, with 91 per cent of respondents said that their dog had had a positive impact on their mental health.

“Being a dog owner supports self-care,” said Bill Lambert, spokesperson for The Kennel Club. “Taking a dog out for a walk encourages social interaction and provides motivation to get outdoors and be active, and this may be the only social contact, exercise or activity an isolated, lonely or anxious person has the whole day.”

Almost half of the respondents said that their dog had helped them feel calmer and less lonely, and many agreed that spending more time with their dog was the most positive effect that lockdown had on their lives.

Sixty-one per cent of people surveyed said that their dog was a ‘lifeline in lockdown’ and that, in general, they found more comfort in their dog than in humans.

Mr Lambert continued: “Being needed by our four-legged friend can be a lifeline when getting through each day is hard and sometimes human support doesn’t hit the mark.

As we continue to face a global pandemic and the psychological stresses that brings with it, this unique support that dogs provide to their owners is now more important than ever. In a world full of chaos, man’s best friend is certainly living up to its name.”