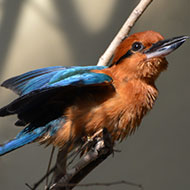 There are around 100 Guam kingfishers left in the world, all of which are living in human care.

The vital conservation work of zoos and aquariums across the world is being put at risk by the huge income losses and reduced visitor numbers that many institutions are facing as a result of COVID-19.

The British and Irish Association of Zoos and Aquariums (Biaza) has praised the introduction of the Zoo Animals Fund - which is designed to provide a safety net for zoos during the pandemic - but states that the rescue package has proven to be largely inaccessible.

According to the BBC, out of nearly 300 zoos and aquariums in England, just one successfully made a claim from the recovery fund.

Biaza has also warned that without vital funding, many international breeding programmes - which are essential in preventing the extinction of rare species - may have to be cancelled.

The Guam kingfisher is just one of at least 77 species of plants and animals classified at extinct in the wild by the International Union for the Conservation of Nature (IUCN). It disappeared from the island of Guam in the 1980s after an invasive species of snake devastated the island’s ecosystem.

There are now only around 100 Guam kingfishers left in the world, all of which live in breeding programmes at US zoos. While there are plans to reintroduce the species, funding issues have placed many of these programmes under strain.

COVID-19 restrictions have resulted in financial difficulties for many zoos across the globe. While the majority have been able to reopen, limited visitor capacities have made it difficult for institutions to generate enough income to cover their huge overheads. Some smaller zoos have already had to close.

According to the BBC, The Zoological Society of London (ZSL) had monthly running costs of £2.3 million at the peak of lockdown, and it predicts it will lose around £20 million this financial year.

Biaza is calling on the government to take urgent action to help zoos and aquariums through this challenging time. For more information please visit the Biaza website.