MRCVSonline cannot control these cookies from outside sources and we advise you to check with the relevant third party for more information..
Government extends badger cull to 11 new areas 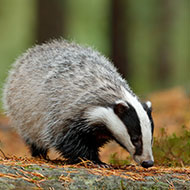 The new badger cull areas include Avon, Derbyshire and Shropshire.

Campaigners say decision is a 'huge betrayal of public trust'.

The UK government has issued badger control licences for 11 new areas of England in a bid to control tuberculosis in cattle (bTB).

Government agency Natural England has re-authorised licences for 33 existing areas, alongside licences for 11 additional areas. Wildlife campaigners have expressed dismay at the decision, as the government had previously pledged to phase out the cull in favour of vaccination.

The new cull areas cover the counties of Avon, Derbyshire, Gloucestershire, Herefordshire, Leicestershire, Oxfordshire, Shropshire, Somerset, Warwickshire, Wiltshire and Lincolnshire.  According to the Badger Trust, the expansion could see an estimated 62,000 badgers culled by the end of 2020.

Environment secretary George Eustice said: “Bovine TB is one of the most difficult and intractable animal health challenges that the UK faces today, causing considerable trauma for farmers and costing taxpayers over £100 million every year.

"No one wants to continue the cull of a protected species indefinitely. That is why we are accelerating other elements of our strategy, including vaccination and improved testing so that we can eradicate this insidious disease and start to phase out badger culling in England.”

Earlier this year, the government set out its intention to ‘phase out’ intensive culling of badgers and instead move to badger vaccination. Responding to the latest decision to expand the cull, Dominic Dyer, the CEO of the Badger Trust, said:

“The decision to expand the badger cull is a huge betrayal of public trust by the government. Rather than phasing out the shooting of badgers in favour of vaccination, the government is now embarking on a mass destruction of the species, which is little more than ecological vandalism on an unprecedented scale.

“In the next three months, the badger cull could kill up to 62,000 badgers across a geographical area larger than Wales. This could result in population collapse with badgers pushed to the verge of local extinction. This is no longer a badger control policy, it’s a badger eradication exercise.”

'We applaud your government’s stated aim of phasing out badger culling, but this appears to be in stark contrast to your apparent intention,' they write.

'If you instruct your secretary of state to revoke licences and explore in short order the alternative methods for disease control that we describe, public opinion and sentiment will be with you. However, if your government chooses to continue the discredited and ineffective badger culling policy, you will be remembered as the prime minister who presided over the greatest slaughter of a protected animal in living memory.'