MRCVSonline cannot control these cookies from outside sources and we advise you to check with the relevant third party for more information..
Vigilance urged following unconfirmed sighting of Asian hornet 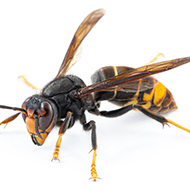 "By ensuring we are alerted to possible sightings as early as possible, we can take swift and effective action to stamp out the threat posed by Asian hornets".

Species a risk to honeybees and other pollinators.

The British Beekeepers Association is urging vigilance following an unconfirmed sighting of an Asian hornet nest in Monmouthshire.

The Association has set up a special local taskforce called the 'Home Guard' - as reported by BBC News - and is calling on members of the public to look out for nests both in their sheds and while out on walks.

A Defra spokesperson said: “By ensuring we are alerted to possible sightings as early as possible, we can take swift and effective action to stamp out the threat posed by Asian hornets.

“While the Asian hornet poses no greater risk to human health than a bee, we recognise the damage they can cause to honey bee colonies and other beneficial insects.Please continue to look out for any Asian hornets and if you think you’ve spotted one, report your sighting through the Asian hornet app or online.”

Asian hornets are identifiable by their dark brown or black, velvet-like body. They also have yellow-tipped legs, a yellow/orange band on the fourth segment of their abdomen and are smaller than the native European hornet.

Until now, the most recent sighting of an Asian hornet in the UK was near Christchurch, Dorset on 1 October 2019. The nest discovered in Monmouthshire has been destroyed.

The Asian hornet is thought to have entered Europe in 2004 and is widespread in parts of France, Spain, the Channel Islands and Portugal.

Suspected sightings of Asian hornet should be reported via the Hornet Watch App or by email to alertnonnative@ceh.ac.uk. Alternatively, you can fill in an online report form.