Cookie use on MRCVSonline
We use cookies to ensure that we give you the best experience on our website. If you continue without changing your settings, we will assume that you are happy to receive all cookies.
Accept Policy
Change cookie settings
Calls for tighter restrictions on keeping dangerous snakes as pets 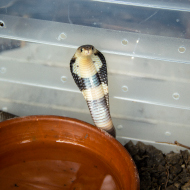 It is currently perfectly legal to sell venomous snakes to people who don't have a licence.

Investigation reveals venomous species are easy to buy, but difficult to look after or find veterinary treatment

Animal welfare experts are calling for tighter restrictions on keeping dangerous snakes as pets, after an investigation by Vet Record revealed that several species of lethal and venomous snakes can be bought easily through UK pet shops.

The investigation showed that several dangerous species, including vipers, cobras and rattlesnakes, can be sold in the UK without the buyer having a licence. It also revealed that dangerous snakes are difficult for their owners to manage at home, and that few vets have the insurance or relevant experience to treat them.

According to the animal welfare charity RSPCA, councils may occasionally use DWA licences retrospectively, which enables collectors to buy venomous snakes before they get a licence. Peter Kettlewell, president of the British Veterinary Zoological Society (BVZS), also points out  that there are no legal controls when venomous snakes are bought in EU countries and brought back into the UK.

Speaking to Vet Record, Mr Kettlewell said: “Pet shops are currently excluded from the requirements of the DWA  Act and are therefore able to keep dangerous species without a DWA licence. BVZS strongly believes the legislation should be changed to prevent this.”

He also said that the BVZS is concerned about the welfare of these animals once in private ownership:

“The husbandry of reptiles is challenging, and even commonly kept reptile species kept in people's homes are given inadequate care – as shown by the high proportion of reptiles presented to veterinary practices with husbandry-related diseases,” he said.

“Providing good husbandry would be made more difficult in the case of venomous animals due to the challenges in handling and managing them safely. BVZS believes that both the keeping of dangerous species by private individuals is likely to compromise both animal welfare and human safety, and as such, the selling of such species to private individuals should be carefully regulated and restricted.”

The RSPCA told Vet Record that it is “deeply concerned” by the amount of venomous snakes being kept as pets, adding that the DWA is “weakly drafted and poorly enforced”.

When Vet Record asked vets if they would be prepared to treat a venomous snake, many said they wouldn't, citing health and safety concerns and insufficient access to antivenom.