MRCVSonline cannot control these cookies from outside sources and we advise you to check with the relevant third party for more information..
Leaky vaccines help reduce transmission of Marek’s disease 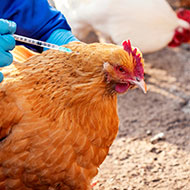 Leaky vaccines are currently the most commonly used method of controlling Marek's disease.

A new study conducted on chickens infected with Marek’s disease has revealed that vaccines that do not prevent onward transmission or infection are more effective in controlling the severity of the disease than previously thought.

Researchers from the University of Edinburgh’s Roslin Institute and the US Department of Agriculture’s Avian Disease and Oncology laboratory (ADOL), conducted the study to analyse how leaky vaccines impact overall populations.

One group of chickens received a leaky vaccine – this contained a related live virus originating from turkeys, which triggers an immune response, but no symptoms. While a second control group was given a sham vaccine, which contained no biological material. Both groups were then infected with Marek’s disease virus and placed with different sets of unvaccinated chickens for 48 hours.

More than 97 per cent of the birds became infected. However, the unvaccinated chickens that had contact with those who had received the leaky vaccine were less likely to develop full-blown Marek’s disease and there were also fewer deaths. This was found to be a result of vaccinated birds transmitting fewer copies of Marek’s disease virus.

Lead author Dr Richard Bailey, who is also a research fellow at the Roslin Institute, said: “In our study, we found that leaky vaccines can provide benefit in terms of reducing the presence and severity of symptoms, and mortality, caused by Marek’s disease even for unvaccinated chickens. We need further research to understand how this effect changes as the virus mutates and in other strains of chickens.”